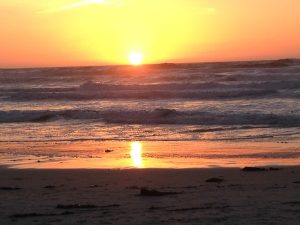 During a recent meditation retreat I walked slowly, my feet sinking into the gravel on the moonlit path that circled the retreat center’s outer courtyard. I had come to deepen my ability to be with people in their dying process. That afternoon I’d been asked to consider my own death.

“What will help you in your dying process?” the facilitator had read to us from the writings of Atisha, an eleventh century Tibetan Buddhist scholar.

“Will your friends help you?”

I thought of two dear friends living in my house, one of whom had recently been diagnosed with pancreatic cancer. I’m guessing being able to live in the house was a welcome respite from the cancer center, with its bustle of people and appointments, but could I really help Beth in her dying process? I could offer comfort, but I could not endure the process for her.

“Will your family help you?”

I thought of sitting at my father’s side, along with my mother and brother, as my father slipped into a deep slumber, his breath gradually slowing, the tide of air moving out until it returned no more. I could offer my love and my presence, but I could not accompany him as he slipped beyond my conscious reach. He was setting sail for a land I could not visit from this shore.

“Will your possessions help you?”

I drew in a deep breath as I walked. The following week I would be visiting my mother, now 82 years old, and the self-appointed historian of our family. In her home she housed five generations of ancestral memorabilia along with the gleanings of her own childhood and the detritus of three children.

Could those possessions help me in my dying process? No, they were for the living, for those who remained behind. For my mother, though, having devoted most of her life to historic preservation, those objects maintained the memory of the people who had used them. She was panicked about finding a home for family treasures. Who would protect and love these objects, and keep the stories associated with them alive?

Spending time with the Shawnee, or Shawandasse as they call themselves, I learned a completely different way of nurturing ancestral memory. During a ceremonial weekend I watched as the nation’s bundle was carefully unpacked. Each object within the bundle evoked an epoch in Shawnee history, sometimes covering hundreds of years.

The stone or piece of carved wood was like a computer file; opening it filled the historian’s mind and heart with a flood of memories, experienced in present time. Native story tellers almost always recount history in present tense because he or she is in that time, experiencing the scene first hand. They are walking the same ground, breathing the same air, tasting the same feast, suffering the same blows.

Remembering history is exactly that – re-membering, bringing the limbs back together, reuniting the people of the past with those in the present. This reconstructive work is deep, powerful work for the storyteller and for the tribe.

As my feet crunched in the gravel on that windless, moonlit night I realized suddenly that our western European method of marking history involves saving physical objects as a way of remembering how people lived, what they valued, what they fought and died for. We seem to need objects to remind us of our history.

In contrast, native people carry history through stories. Tribal historians are trained in maintaining stories with impeccable accuracy. The storytellers don’t succumb to the vagaries of the “telephone game,” with the final message being almost unrecognizable from its origin. They don’t embroider or alter the details. They carry the history with focused precision.

The loss of a storyteller was like the burning of Alexandria’s library: several millennia of history died with him or her. That is why the storyteller played such a key role in tribal gatherings. Each telling of a story would plant that ancestral memory in the people’s minds and hearts, allowing the wisdom to be seeded throughout the entire community.

Stories travel more lightly than physical objects. Most native people did not invest in outer technology or accumulate large amounts of physical stuff. Instead, they invested in intangibles, the inner technology of the mind and heart.

I’m eyeing my own store of memorabilia: ribbons won at competitions and fairs, stones and seed pods, carved goddesses and yellowed love letters. Which of my sacred objects would I devote to the bundle, and what stories would they ignite for ancestors following in my wake? I want a bundle that will be light to carry, well protected by deer skin, and filled with the richness of my blood line’s stories. May this bundle add inspiration, wisdom and guidance to the ancestral river that runs through me. May it be a gift, not a burden, to carry.

Dr. Judith Boice, ND, LAc, FABNO (Naturopathic Doctor, Licensed Acupuncturist, and Fellow of the American Board of Naturopathic Oncology) is deeply trained in both western and Chinese medicines, so she sees people with two eyes, from two perspectives. These two medical disciplines are seamlessly integrated in her practice.

Dr. Boice’s practice differs even from other naturopathic physicians’ in her focus on creating health rather than simply eliminating disease. Her concierge practice combines cutting-edge, scientific medical research with the ancient roots of healing practices that address emotional, mental, spiritual as well as physical health. Her work bridges the worlds of science and soul.

A woman of many accolades, she is also an award-winning author and international teacher. She has a passion for working with cancer, women’s health, pain and chronic illness. Traveling all over the U.S., she has conducted over 1000 trainings and public lectures on women’s health, menopause and osteoporosis. She is the author of several magazine articles and 10 books, including The Green Medicine Chest: Healthy Treasures for the Whole Family which was honored with a Silver Medal in the Nautilus Book Awards and a Bronze Medal in the Living Now Book Awards. Dr. Boice worked for three-and- a-half years as a naturopathic oncology provider at Cancer Treatment Centers of America, Southwestern Regional Medical Center. Content goes here