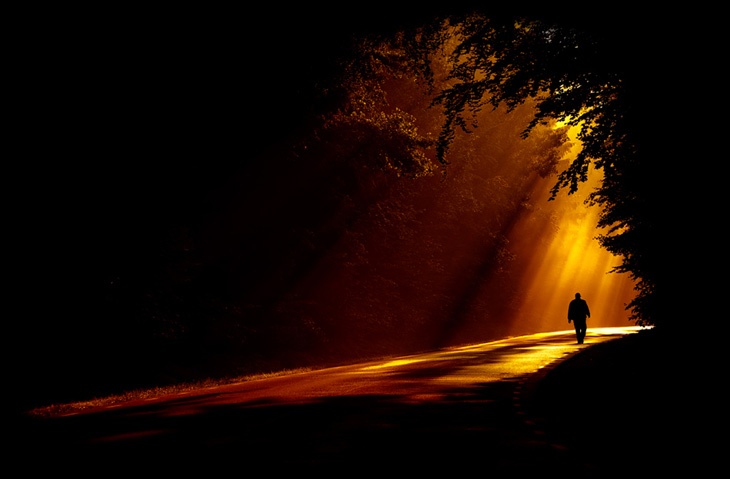 Years ago my Vipassana meditation teacher read us a fable about a dying monastery. The villagers no longer visited the sanctuary, and the monks quarreled among themselves. The brick walls of the monastery crumbled from years of neglect.

The monks hired a consultant to help them revitalize the monastery. After spending several days observing their rituals and joining them in worship, the consultant gathered the monks together.

“One of you,” said the man, “is the second coming of Christ. One of you carries the Christ-light.”

The monks looked furtively at one another. Could it be? One of them was the Christ?

Over the coming days and weeks, the monastery gradually transformed.  The monks spoke more kindly to one another – what if he was speaking to Christ? They worked with respect, and regarded each other with deference. Who wouldn’t, knowing he might be serving soup to Christ, or kneeling next to the Son of God?

The villagers noticed the change in the monastery and began to visit more regularly. Soon the sanctuary was filled on Sundays, with many eager worshipers. The monastery blossomed.

What if I treated my family and each patient as if he or she was the return of Christ? What if Christ was alive in me, in you, and in the world? What if I embodied that knowledge in my life?

James Twyman wrote about a boy who attended one of his evening teachings. After the room cleared, this shining-eyed boy awaited him.

“James, what would you do if you knew you were a child of light?”

James creased his brow, stymied by the question. “What?”

The boy quietly repeated, “What would you do if you knew you were a child of light?” He paused. “Do it now.”

The encounter with the boy initiated a journey that took James into the heart of eastern Europe, where he met several similar, spiritually gifted children. All of them carried the same message. The time is now for each of us to claim that divine light within us. What would you do, what would I do, if we knew we were children of light?

So many days I fall short. I am frustrated with the teller at the bank and want to curse as I roar away from the drive-in window. I am angry at my son for stuffing clean underwear under his chest of drawers, and moldy sandwiches under his mattress. What would change if I knew he was a child of light?

I’d forget about the bank account and devote myself to writing, teaching, and creating a host of projects I’ve relegated to “some day, when I have time.” I would allow more and more light to flood in and through me, until I was nothing but a river of light.

Of course I’d still go to the grocery store, chop carrots, and make the bed in the morning. None of that would change. The difference would be the trail of light that would illumine everything I touched, and every word I spoke.

My outer actions would not change, but the quality of my deeds would transform.

I would be more alert to see that metamorphosis in others as well. What kindness I would see in your eyes, what grace in your actions. Yes, I know you are a child of light.

Oh, the light is here among us. Pass it on.

Dr. Judith Boice is a naturopathic physician, acupuncturist, and Fellow of the American Board of Naturopathic Oncology. She works with people in a physical, mental, emotional and spiritual way, at the crossroads of science and spirituality. She treats you like a whole person not a collection of symptoms.

Do you want crystal clarity about your where you want to go with your health?

What do you long for? Dr. Boice is offering you a free one-on-one session to gain crystal clarity about your vision of health and your next best step. Schedule your session with Dr. Judith Boice